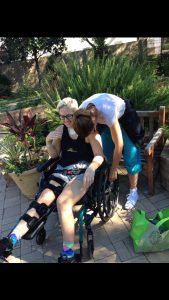 Mother of two, Sherri, younger sister Delaney and Savannah Spicer, better known by their friends and family as the “Spice Girls,” share an unbreakable bond.

On Aug. 23, 2014, Savannah, 19 at the time, bid farewell to her mother and younger sister in Orlando, and drove to Tallahassee to start her fall semester at Florida State University. But 20 minutes from FSU, Savannah’s tire blew out on Interstate 10. In the blink of an eye, her car flipped, and she was partially ejected from her vehicle. Savannah had a traumatic brain injury with bleeding in three spots, and an incomplete spinal cord injury.

Emergency crews arrived on scene with the assistance of UF Health ShandsCair 3 to airlift Savannah to a nearby hospital. Arielle Bernstein Register, EMT-P, a flight paramedic for ShandsCair 3, vividly remembers the scene.

“I remember what stood out is she looked close to my age. Someone had said she was a student, and I was a student at the time at UF,” Arielle said.

EMS crews had stabilized Savannah by the time ShandsCair 3 arrived, and law enforcement officials had discovered her kitten with a bloody nose peeking its head from the vehicle. Arielle and the ShandsCair 3 team intubated Savannah, loaded her into the helicopter and initiated a trauma alert to the receiving facility.

For three weeks, Savannah remained in an intensive care unit with a tracheostomy for easier breathing and a gastrostomy feeding tube for nutrition. Savannah also underwent spinal fusion surgery to treat her back injury. 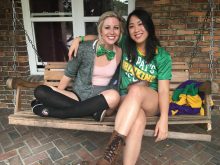 “It was touch and go for a while,” Savannah said. “My mom took a leave of absence and slept in my room every night. My family is my world.”

During her stay at the hospital, she was unable to feel anywhere beneath her upper abs and needed to use a wheelchair for three months. After her stay at the ICU, Savannah was transferred to a rehabilitation center to improve her mobility.

“At the ICU, my mom was told that the chances of me walking again were slim,” Savannah said. 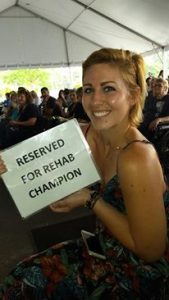 It took her months to stand in one place, Savannah explained. Once a gymnast, it was now difficult for Savannah to stand on her toes. At first, she couldn’t walk on her own and had to use a walker. Determined to walk unaided, Savannah pushed through and progressed faster than others anticipated. She trained her brain to focus more intently, which included teaching herself to write left-handed even though she is right-handed.

After her time at rehab, Savannah was sent home to Orlando to start her outpatient physical therapy. In the spring of 2015, she resumed online classes at FSU and, in May of 2015, she started a summer semester on campus.

Two years later after her accident, Savannah is completing an undergraduate degree in visual disabilities at FSU’s College of Education. After her bachelor’s, she would like to pursue a one-year master’s program to study orientation and mobility for the visually impaired. She aspires to start her career with early intervention for infants with visual impairment, and return to school for occupational therapy for pediatrics.