Each November, millions of Americans give thanks for family, friends, football and a feast on Thanksgiving. But for some families, like the Bowmans, this time of year means so much more 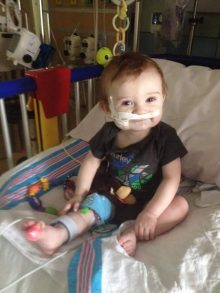 On Nov. 6, 2013, Frank and Gini Bowman of Ocala welcomed their first child, Micah. The day after his birth, physicians noticed that Micah had difficulty breathing. At less than 48 hours old, clinicians rushed Micah to UF Health Shands Children’s Hospital in Gainesville by UF ShandsCair helicopter. Doctors in the neonatal intensive care unit said Micah had Tetralogy of Fallot, a rare congenital heart condition that is a combination of four heart defects. Micah was monitored for a week, and then sent home with Frank and Gini.

Two weeks later, on Thanksgiving day, both parents realized that Micah wasn’t eating. Throughout the evening, his condition deteriorated, and he was admitted to the emergency room in Ocala. Upon examination, he was once again airlifted to UF Health – this time with more difficulty. Once ShandsCair arrived, Jenny Knight, R.N., a flight nurse for the neonatal flight team and an employee of ShandsCair for nearly seven years, worked relentlessly to place an IV in Micah.

“I remember her saying, ‘I’m in, I’m in,’” Gini said. “Jenny said he was essentially in end-stage heart failure. He was actively dying.”

At 2 a.m., the flight crew stabilized Micah and transported him to Gainesville. Frank and Gini followed by car.

UF Health doctors discovered that Micah’s left heart ventricle showed significant weakness. Clinicians kept him on medication for a month to strengthen his heart for surgery, and in January, Micah underwent an operation performed by Mark Bleiweis, M.D., the director and chief of congenital cardiothoracic surgery at the UF Health Congenital Heart Center. Gini and Frank left the hospital and headed home to regroup. Shortly thereafter, they received a call that their little boy had quickly declined. As doctors worked to resuscitate Micah, both parents were rushed to Gainesville with the help of a friend.

“We were completely distraught,” Gini said. 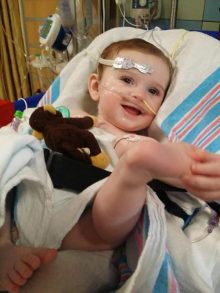 Meanwhile, at the hospital, Bleiweis had opened Micah’s chest to calm down his body. Once Micah’s condition stabilized, Gini and Frank checked into a nearby hotel but at 4 a.m., Gini received another call — Micah coded again. In nearly 20-degree weather, Gini, who did not have a car in Gainesville, grabbed a blanket from her hotel room and ran to the nearby Steak ‘n Shake where she spotted two parked police cars.

“I told them, ‘I need to get to the hospital now,’ and without hesitation they drove me there,” Gini said.

Once she reached Micah’s room, it became evident that his heart was not going to recover.

Doctors and nurses explained that they were going to take Micah to the operating room until a Berlin Heart, a ventricular-assist device designed to act as a bridge to transplant, arrived at the hospital.

“Dr. Bleiweis said, ‘I’m taking him into my ballpark. If I have to put him on bypass and wait, I will,’” Gini said.

As hours passed by, Gini signed paperwork to put Micah’s name on the transplant list, and on Jan. 8, Micah received his Berlin Heart.

“It’s really something to walk in and see that [the Berlin Heart]. It’s very difficult to see,” Gini said. “You have to look past what you see and rely on what you’ve been told about the machine — and know that it’s there to save him.”

Micah received his heart transplant after seven and a half months of waiting. He would begin his second chance at life.

Now living outside of Charleston, South Carolina, Micah, 3, is about to begin preschool. As a bustling little boy, he loves to be outside, watches Mickey Mouse, plays with his little sister, Serenity, and his dog, Lady.

“Just recently he learned how to say, ‘Hi, my name is Micah Bowman,” Gini said.