Nothing gives Kendall Lewis, better known as Miss K, more joy than seeing “her” helicopter flying high in the sky. And by “her” helicopter, we mean the ShandsCair chopper that serves the UF Health Shands Hospital. 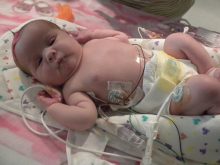 Five-year-old Miss K was born in Ocala to Mindy and Ray Lewis, joining her older sister, Taylor. She was a full-term baby with no known health complications in utero, but shortly after her birth, physicians discovered they were unable to suction down her throat into her airways. Miss K was diagnosed with tracheoesophageal fistula with esophageal atresia, a condition where the esophagus does not attach to the stomach. In addition, doctors found the girl was born without an opening to her anus. Leaving doctors stunned, Miss K was rushed to the neonatal intensive care unit, or NICU, where physicians determined that she would need to be transported to UF Health Shands Children’s Hospital.

With a ShandsCair ambulance en route to pick up Miss K, physicians saw the infant had started to turn blue. She had also been born with tetralogy of fallot with pulmonary atresia, a complex congenital heart defect.

Upon arrival at Ocala, ShandsCair’s specialized neonatal team swiftly loaded up Miss K and whisked her to the NICU at UF Health Shands Children’s Hospital for further evaluation. It would be determined that Miss K was born with a multiple-system issue known as VACTERL association, which stands for congenital defects of the spinal cord, anus, cardiac defects, trachea-esophageal fistula, renal anomalies and limb abnormalities.

“VACTERL is not genetic and the chances of having a child with all the components are 1 in 140,000, The chances of developing what Miss K has, VACTERL in addition to lung and immune system abnormalities, are about 1 in 1.5 million,” Mindy said.

At 5 days old, Miss K underwent her first round of surgeries, performed by Saleem Islam, M.D., M.P.H., the chief of pediatric surgery at UF Health Shands Children’s Hospital, to repair her anus and esophagus. At 26 days old, Miss K had her first open-heart surgery, performed by Mark Bleiweis, M.D., the center director and chief of congenital cardiothoracic surgery at the UF Health Congenital Heart Center. Over the course of five years, Miss K was diagnosed with lung and immune system abnormalities that were monitored by UF Health physicians on a regular basis. In addition, Miss K underwent two additional open-heart surgeries and a heart catheterization.

“At one point, she had a running tally of 135 doctor appointments in a year,” Mindy said. “Last year, she was an inpatient for a total of 30 days.”

Whether she’s going to an appointment, being prepped for surgery or visiting her friends in the pediatric cardiac intensive care unit, also known as 10-2, Miss K first looks for ShandsCair helicopters flying around the hospital.

“From the get-go, she has been obsessed with helicopters,” Mindy said. “The first thing she does when she goes to 10-2 is to go past each room looking for helicopters. She lights up like a kid in a candy store when she sees them.” 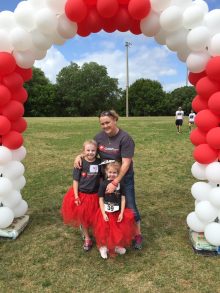 “She’s obsessed with them,” Mindy said. “She’ll hear them come in and she’ll say, ‘Where is it, mom?’ There is something about the ShandsCair helicopter. She calls it her helicopter.”

Three to four times a month, Miss K travels to Gainesville for doctor appointments and never fails to spot a ShandsCair helicopter or ambulance along the way.

When it comes to inpatient stays, Miss K has a special request.

“She’ll ask, ‘Are they going to put me in a room where they see helicopters?’” Mindy said. “When she had her heart cath, it was raining and the chopper wasn’t flying. She was so sad.”

Miss K will continue to see physicians at UF Health for medical tests, routine check-ups and maintenance procedures while still keeping her eyes and ears open for the ambulance sirens and chopper wings.

In September, Miss K went to her first Gator football game at the Swamp. What was her favorite part? The ShandsCair chopper flying above, of course.

Saving Lives in the Air